The New Inn stood on the corner of the High Street and Luton Road, opposite the Angel Inn. In its early years it appears to have been associated with a neighbouring brewery. It first appears in a directory in 1847 and does not appear in the countywide licensing registers of 1822 to 1828 and so must first have been licensed between 1828 and 1847.

In 1899 a dwelling house, brewery, malting, stabling, garden and premises known as "The Toddington Brewery" together with the public house known as the New Inn and adjoining cottages, was leased by Henry Whitbread of the Old George Inn, Bedford, licensed victualler, to the occupier, Thomas George Green of Toddington, brewer, for 21 years at £100 per annum [BS2235]. The lease also gave Green the option to purchase the property from Whitbread for £2000 at any time during the 21 year term. The fixtures and fittings included with the New Inn consisted of a beer engine, a bar counter, shelves etc., as fitted in the Bar, all the window rollers, blinds and fittings, and gas fittings.

Under the terms of the Rating and Valuation Act 1925 every piece of land and building in the country was assessed to determine the rates to be paid on them. When Toddington was assessed in 1927 the New Inn was clearly in decline. It was a free house owned and occupied by Miss Marler who had been there for six months. The inn consisted of a bar parlour, a tap room, a bar, a dining room, a kitchen and an office, with three bedrooms upstairs. Outside were two stables, a garage, cart hovels and a derelict brewery. The valuer's comments were damning. He called it a "miserable looking place" with "very poor bars". The manager "sells his beer at 3d a pint" and the valuer thought the "trade given me overestimated in view of closing order. Only one customer in bar at 10.35am … Local gossip – gives away beer to attract custom." The manager stated weekly trade to be four barrels of beer, 20 to 30 dozen bottles of beer, and 3½ to 4 gallons of spirits, which the valuer assumed to be "a lie". A more realistic list of one 36 gallon barrel of beer and one 18 gallon barrel of bitter a week, and ½ gallon of spirits a month was added [DV1/C84/27].

The New Inn closed on 29 December 1928. In 1980 the former inn premises at 15 High Street were listed by the former Department of the Environment as Grade II, of special interest. The listing describes the property as dating from the early 19th century, possibly with an earlier core, and being of whitewashed brick with a slate roof. In 2015 the property was in use as the Toddington Social and Services Club.

List of Licensees: note that this is not a complete list; entries in italics refer to licensees where either beginning or end, or both, dates are not known:

Following the death of Annie Bunker in January 1927 the New Inn was closed and all the private fittings were sold off, and the new owner, Miss Marler, no doubt wished to move back to London.

In April 1928, twenty-four men sat down at a table in the New Inn and each placed £1 on the table thus creating the founder members of the Club. Three of these members still being alive at the time of writing namely Sid Pateman, Will Fowler and Billy Coles, now living in Yorkshire. The prime movers behind the meeting were the brothers "Vincent", who were relatives of Miss Marler together with William Brewer (Bill) they were elected trustees, The committee was then elected and John Lampard was appointed the first Steward/Secretary.

The first Club Committee was as follows:

Note at this time it was usual practise for the Steward to double as the Secretary with his wife assisting in both capacities as necessary. At the time John Lampard was not married, but the practice continued until 1945.

Bill Hair in his usual blunt fashion recalls that John Lampard was also a relative of the Vincents and moved down from London to take the job and described John as "a miserable old bugger not over fond of work". so it is not surprising he only stayed two years when he married Miss Simpson, the N.B.C's Reps daughter and moved on to better things.

Bill Hair went on to relate "Bill Brewer was a good old boy, always good for a laugh. When he had his fill he would burst into song, his favourite being Uncle Tom Cobley in which his name featured. He sported a fine moustache.

At the time Dick Shelton recalls membership was 1/- per year (5p), beer 2d a pint (>1p) and members totalled about 60 persons.

On 17th February 1929 the Club members passed a resolution duly authorising their Trustees to purchase the premises they were renting. On the 8th March 1939, some 13 months later, this resolution was finally implemented and the conveyance was signed. This was achieved by a mortgage with the Northampton Brewery Company and was sealed on 10th March 1930.

The amount advanced was £1100 and was subject to the following conditions:

1. Interest would be paid at 5% per annum in two equal instalments due in March and September each year.

2. A peppercorn rent would charged yearly due September and the option of renewal would be at the prerogative of the Club (i.e. Tenants at will)

3. The Club would be responsible for repairs and maintenance and make sure the insurance was available.

4. Not to sublease the premises without the authority of the Brewery in writing.

Thus the Club was already in debt, owing more than the properly was worth, and was destined to struggle for several years. the depression did mot help any.

Despite this, due to the vision of the committee and the energy of Bill Hair, the Club entered into a period of time where more was done to the premises than at any other time.

The club prospered until the outbreak of war when it's membership dwindled as men joined up, eventually it closed. Early in 1940 it was requisitioned by Colonel Skinner for use by the Home Guard. Almost immediately the building was revitalized and became the hub of the village social life. The bar was reinstated, whist drives and band practices were held there and every Saturday night there was a dance with music played by by a trio formed by Bill Greengrass. Bill had the local greengrocers just across the road and his band was him on mandolin and banjo, his wife Doris on piano and Alan Eldred on drums. Later Alan Eldred was called up and the drum chair taken over by Harry Higgs.(the authers late father)

After the war, the club was in a healthy state and was handed back to a newly formed committee, who renamed it Toddington Social and Services Club 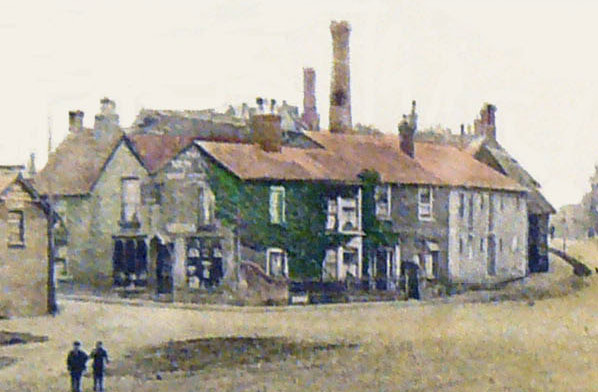 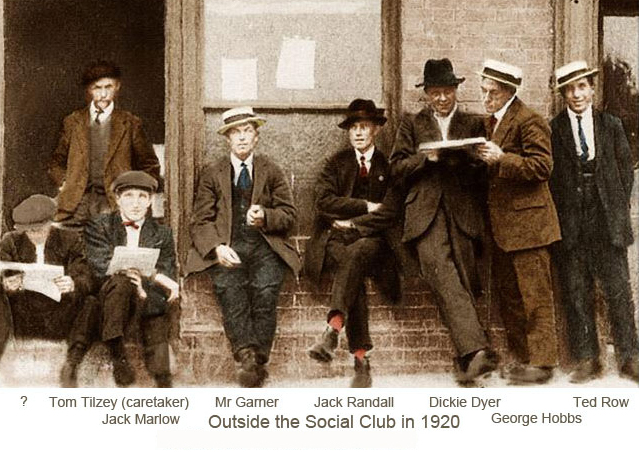 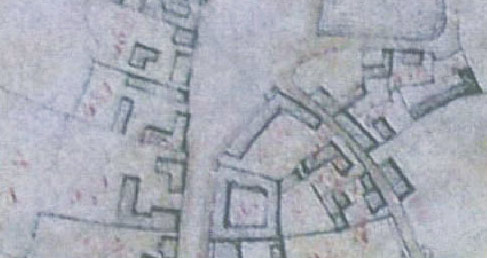 1796 map showing the buildings back in the day 1900 showing all the enterprises at the Club. There was even once a fish&chip shop up Luton Road 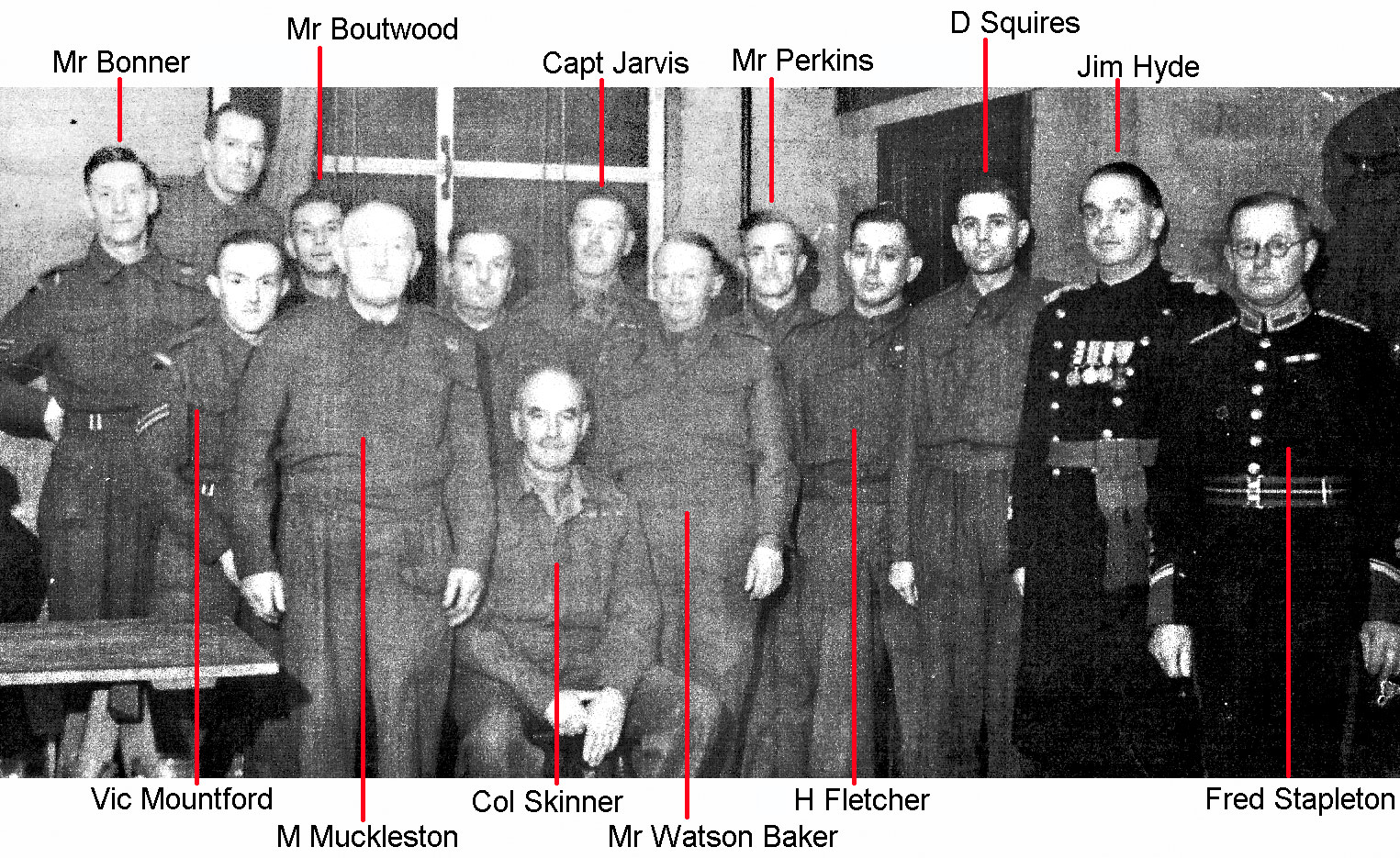 The Home Guard who took over the Club in 1940

Club Dinner 1950 and the little lad pulling a face on the lh side was non other than George Day
Just to let you know, this site uses cookies to provide you with great user experience and analyse site traffic. By continuing to use this site you consent to the use of cookies.